OS grid reference SV 8804 0077. Above the rock-strewn shoreline of St Warna’s Cove at the south-western side of St Agnes, Scilly Isles, and tucked away beside a coastal trail and field enclosure at the far north-eastern edge of Wingletang Down, is St Warna’s Well. It is almost certainly a natural spring that was Christianized by the presence of St Warna back in the so-called Dark Ages – the 5th or 6th century AD, although nothing much is known about him or her, I’m sorry to say.

The well is situated under a little grassy mound and a few steps go down into the dark, stone-lined chamber, while its roof is a slab of stone and its outer sides, especially at one side, are constructed of larger lumps of flat stones. In days gone by pins were thrown into the well and a wish made in order that a ship would be steered away from treacherous rocks, or on the other hand, a bent pin (or several bent pins) thrown into the water and wishes made ‘for a ship to be guided onto the rocks and wrecked so that the booty could be plundered by the locals’. Once washed ashore the booty was regarded as ‘belonging to the islanders’. St Warna is patron saint of shipwrecks, oddly enough! But despite that, the well was visited by pilgrims hoping to obtain some miraculous cure for certain ailments – for its waters were long regarded as being curative.

According to legend, St Warna, a female saint sailed from the south coast of Ireland to the Scilly Isles in a coracle made of wicker and covered in hides; another legend has it that she sailed across the sea in a wicker basket! However she, or he, sailed here, St Warna lived beside the well and imparted her/his holiness to the place. I don’t know whether there was ever a chapel on this site, but it’s possible there once was long ago. We know next to nothing with regard to St Warna – could she have been one of the many followers of St Bridget of Kildare in Ireland, or if a “he” maybe a follower of St Patrick? We just don’t know, unfortunately. There have also been very “tentative” efforts to link the saint with a Celtic goddess of the sea. Anything’s possible, I suppose. One suggestion being that St Warna was a female saint of the 2nd-3rd century AD.

F. Gibson says that: “This bay is steeped in legend. Tradition tells us that Santa Warna came from Ireland in a wicker boat covered with hides and landed in this bay. A holy well marks the spot. The inhabitants used to show their devotion and gratitude to the saint by visiting the well on the day following the twelth day, performing superstitious ceremonies, which of course were followed by the customary feastings and rejoicing. By the glory of nature Santa Warna herself is carved in rock. She is best seen from the southern side of Little Porth Askin cove.”

Gibson, F, Visitors companion to the Isles Of Scilly, (no publisher and no date). 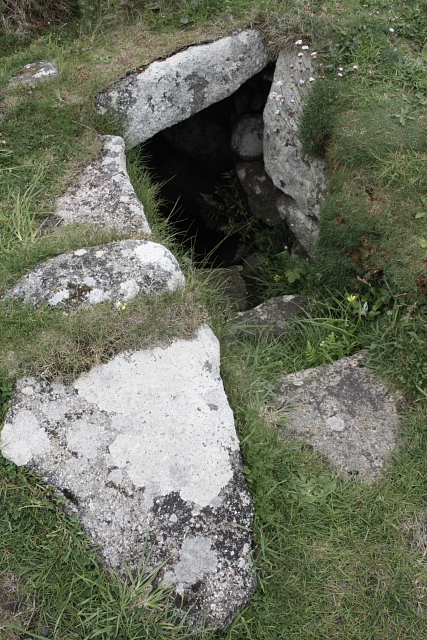 Colquhoun, I., The Myth of Santa Warna (The Glass) No 1 , Summer, Unpaginated.

Guide to the Natural History of Scilly – Nature Trails and their habitat, St Ives, Cornwall, England.