Latitude 29.975350. Longitude 31.137500. Ancient site at Giza in Lower Egypt, 12 miles south-west of Cairo. The ‘Great Sphinx’, also known as ‘the Sphinx of Hamaldis’, whilst during the time of the ‘New Kingdom’ it was called ‘Horus of the Horizon’ and, in modern Egyptian Arabic ‘the Terrifying One’ – (Wikipedia). It stands just 200 metres from the Pyramid of Khafra, and is known to the local inhabitants as ‘the guardian of the Giza necropolis’. The nose of the sphinx was apparently chopped off back in the 7th century AD and, not as many historians had once thought, by the cannons of Napoleon Bonaparte’s army in 1798, but I suppose that made for a good story!

The great sphinx dates from the 4th dynasty of the pharaohs (2,575-2,467 BC) and is thought to represent Khafra, who ruled between 2,558-2,532 BC). However, some historians now think the statue might date from the New Kingdom (1,570-1,070 BC), according to author Cathal Coyle in his “very concise” article ‘Famous Landmarks’ in the magazine ‘Ireland’s Own’.  This gigantic crouching limestone monument, located on the western bank of the river Nile, is 66 feet high, 63 feet wide and 220 feet in length; and has the body of a lion and the head of a human, possibly Khafra, but there is no certainty about that.

Author Cathal Coyle in his magazine article says that: “When Khafre came to power during the 4th Dynasty, he constructed the Great Sphinx by  using limestone core blocks weighing hundreds of tons in his temples. His craftsmen also created more than 200 statues; 22 of these were at least three times life size.”

Coyle goes on to say: “Representative of two Egyptian gods – the pharaoh god and the lion god, the sphinx combines the body of a crouching lion with the head of a human. In ancient times, it is thought that the face and body were painted dark red and the head cloth was yellow with blue stripes.” There are said “still” to be traces of this red paint on the head of the sphinx, especially ‘it is said’ near one of the ears.

“Although there has been great speculation about the nose of the Great Sphinx, it is not actually known what happened to it. The drawings made by European travelers of the 16th and 17 centuries to Giza show the sphinx’s face complete with a nose.”

“By the time of Napoleon’s expedition to Egypt in the early 19th century, the nose was missing. One possible suggestion is that the face of the sphinx was the victim of target practice by the French army! Some scholars also believe that the sphinx originally had a beard. Pieces of the beard discovered by excavation are in the British Museum in London.”

“Much controversy has surrounded the Great Sphinx, including whether or not it was actually carved as late as the 4th Dynasty. An accumulating body of evidence, both archaeological and geological, indicates that the Sphinx is far older than this – and was only restored by Khafre duting his reign.”

Cathal Coyle goes on to add that: “Some  archaeologists have also suggested that it was a memorial to a Pharaoh, but other scholars believe the Sphinx functioned as an astronomical observation device that marked the position of the rising sun on the day of the spring equinox. Later Egyptian rulers worshipped it as an aspect of the sun god, calling it Hors-Em-Akhet or ‘Horus of the Horizon.”

“What saved the Great Sphinx from complete destruction is the fact that it had been submerged beneath the desert sand for most of its existence.”

“Between 1816 and 1858, a series of adventurers, including Giovanni Caviglia and Gaston Maspero, attempted to clear the sand from around the body of the Sphinx but were each forced to abandon the project due to the enormous amount of sand. Finally, between 1925 and 1936, the French engineer Emil Baraize was successful in clearing the sand to reveal the base of the Sphinx.”

“Repairs to the Sphinx have been made over the centuries by the Pharaohs Tuthmosis IV and Ramesses II, and also during the Roman era. In the 1980’s, during a six-year period, more than 2000 limestone blocks were added to the body of the Sphinx and various chemicals were injected in the hopes of preventing the deterioration. This treatment was not successful and sadly contributed to further deterioration. The Great Sphinx at Giza continues to deteriorate because of the humidity and the ever-increasing smog from nearby Cairo.”

Author Cathal Coyle concludes his article by saying that: “The focus appears to be on preservation rather than further explorations; but towards the end of 2010 during routine excavation work in the area of the monument, Egyptian archaeologists discovered large sections of mudbrick walls which were part of a larger wall which stretched for 132 metres around the Great Sphinx.”

OS grid reference: TA1332 0890. The mausoleum stands in the grounds and woodlands of Brocklesby Park (south side) close to Brigg road and high street at Great Limber. The following is from ‘A Description of The Mausoleum in Brocklesby Park, Lincolnshire, by T.Espin, Boston, 1808′. 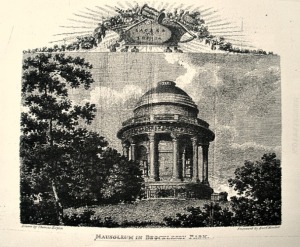 “This sepulchral monument was erected by the presernt Lord Yarborough, to perpetuate the memory of his much lamented and amiable consort, who in the prime of life was seperated from him and from the world, by a malignant fever of the brain”.

“It is situate in his lordship’s park near the village of Limber* upon a commanding eminence the site of an ancient tumulus, evidently a place of Roman sepulture; the various urns full of burnt earth, bones and ashes, together with a variety of rings, combs, and perforated beads discovered on laying the foundations, fully justify such an opinion; it may therefore with great propriety be observed, that this elegant classic building stands majestically elevated on classic ground”.

*At Limber is a very good inn, near which Lord Yarborough has built a lodge where keys are kept to accommodate strangers who wish to see the building.

“It was built from the designs of James Wyatt, esq. and completed under his direction in 1794. Its form is that of a Grecian temple of the peripteral kind; the colonnade consists of twelve fluted doric columns, which stand upon a rusticated basement about fifty-two feet diameter, these support a bold entablature, the frize of which is highly enriched with festoons of roses, sun-flowers and poppies, suspended from the horns of that appropriate doric ornament the bull’s skull over each column and tied upin two intervening places by bunches of ribbons; from the top of this entablature rises a very fine open balustrade. The external body of the temple is nearly forty feet diameter, is surrounded by four niches, in each of which stands a sarcophagus, this part rises to a small height above the balustrade, where it is covered with a dome, the commencement of which is stone, the upper part copper, with a circular curb of stone-work surrounding an aperture at the summit, through which descends the light necessary for the interior of the chapel”.

“The basement part contains the cemetary, a most excellent piece of white brick-work, formed into compartments and recesses for depositing coffins: in the this apartment lie the remains of Mrs. Pelham, together with her father and mother the late Mr. and Mrs. Aufere, Mr. Pelham, great uncle to the present Lord Yarborough, and Francis Anderson, esq. his lordship’s father”.

“Above this basement is the chapel ascended from the north by a spacious flight of steps. In a rectangular compartment above the door is the following inscription:

TO THE MEMORY OF

“The first object  on opening the door, which cannot fail to affect the mind of sensibility, is the statue of Mrs. Pelham standing in the centre of the chapel on a cylindrical pedestal of whilte marble; the right hand supports a robe most exquisitely managed, the left arm resting on the trunk of a tree, sustains the head; the dress throughout is chaste and consistent, the drapery finely executed, the attitude strikingly graceful, the countenance placid and serene, and the whole may justly be considered a first rate production from the fascinating chissel of Nollekens”.

“The chapel is divided into four compartments by eight fluted corinthian columns of Derbyshire marble; that on the north contains the door; in that opposite is an elegant cenotaph to the memory of Sir William Pelham of Brocklesby, who distinguished himself at the siege of Leith and in defence of Havre de grace; in 1579 he was appointed lord justice of Ireland with the authority of lord deputy; on his return to England, he was made lieutenant general of the ordinance, and accompanied the earl of Leicester as field marshal to the low countries in 1585; after performing signal service to his country, he died at Flushing in 1587. The tomb consists of a plain marble base sustaining a double pyramid, before which stands a large sarcophagus with a colossean female statue sitting thereon, holding a stork; the emblem of filial piety. The family arms are supported by a weeping Hymen with his torch inverted”.

“In that recess on the east, stands a monument composed of a plain marble basement supporting a pyramidical slab and sarcophagus, on which lies a very large female figure resting on the left arm; in the other hand is a medallion on which is represented the bust of Charles Pelham, esq. of Brocklesby, who died in February, 1763, aged 84″.

“The remaining compartment is occupied by the monument of Francis Anderson, esq.* of Manby, who died on October, 1758, aged 47. On a basement similar to the last, and in front of a like pyramid, stands a fluted sarcophagus, on which sit two naked boys supporting the family arms; that on the right thoughtful and pensive, that on the left cheerful, holding in his right hand the endless serpent with a butterfly walking around, an emblem of the soul traversing eternity”.

*Father to Lord Yarborough, but the estate came to his lordship from the above C. Pelham, esq., his uncle.

“The fine proportioned columns which seperate these recesses, support a bold entablature crowned with a highly decorative dome; the bottom part of stone is divided into enriched compartments, the upper part is stained glass executed by Eginton in a masterly style; the design exhibits numerous cherubim floating among clouds in seeming adoration to the supreme, allegorically represented by expanding rays from the centre: this happy and interesting finish, obstructs all glaring light from above, and diffuses a gloomy shade overy every part below, which inspires the mind with reverential awe”.

“Throughout the whole of this beautiful fabric, Mr. Wyatt has displayed great skill in Grecian architecture, and has united solidity of workmanship with chastity of design; it is calculated to brave many a winter’s blast, and will long continue a fine memorial of that gentleman’s classic taste”.

“From the colonnade the prospects are commanding and varied, but those towards the north, or north-east, the most picturesque; the middle ground is composed of a variety of forest scenery, and a sweep of the Humber forms the boundary of sight”.

“The trees immediately encompassing this repository of mortality have been too recently planted to envelop it in solitude, and give that solemnity of appearance so necessary to be connected with places of this description; however the plantations have been judiciously laid out, and in the course of a few revolving years will unquestionably assume that character at present so devoutly to be wished”.