SM 7510 2437. On the windswept headland at Caerfai, 1 mile south of St David’s overlooking St Non’s Bay, is St Non’s holy well, a place of great sanctity to the Welsh people. Here, according to the Legend, in about 500 AD Non, daughter of Cynyr, prince of Pembrokeshire, gave birth to her son St David, patron St of Wales, in somewhat miraculous circumstances during a thunderstorm when she was pursued here by Sant of Ceredigion, the probable father of her child. At the moment of the birth Non leaned upon a stone into which she pressed her fingers (these marks can still be seen in one of the stones close by the well). The stone apparently split in two when it was hit by lightning. At the very moment of the child’s birth a spring of water gushed forth from the ground (St Non’s Well). But, in fact, we know that the well predates Christianity – it is a naturally formed spring that was here when the land was geologically formed. The remains of a Bronze-Age stone circle or cromlech can still be seen around the well – strong evidence that this was once a pagan site. 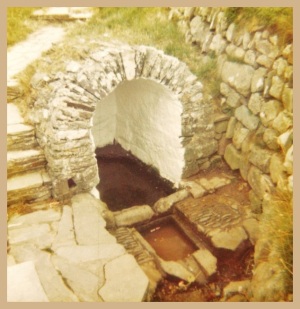 The well has an 18th century plain-vaulted stone hood above it which replaced an earlier medieval well-housing. Today the well is used mainly as a wishing well but pilgrims still come here, as they have for hundreds of years, in the hope of a miraculous cure for many diseases and ailments were apparently cured here by the water – such diverse things like child-bearing and eye complaints. Reputedly the water in the well ebbs and flows with the tides. Behind the well is a shrine with a statue of St Non? inside a stone niche. The well-kept shrine is often adorned with flowers put here by Catholics who visit the nearby retreat centre and modern chapel dedicated to St Non.

A short distance to the south-west stands a ruined medieval chapel. Leaning up against the south-west facing wall is a 7th century stone with an incised Latin ring cross. Originally this stone was embedded into the eastern wall. The chapel went out of use following the Reformation and may have been in use as a house at some point. An archaeological dig inside the ruin found roofing tiles, pottery, stone coffins and a medieval brass with the figure of a priest engraved onto it.