SK1603 6355. To the east of the A515 Buxton road and along a rough track at Gib Hill farm, near Middleton, is the 3,000-4,000 BC Neolithic henge monument known as Arbor Low. It is actually a stone circle although the stones here are recumbant and some are now broken. In all there are 50 limestone blocks situated upon a plateau on a high, oval-shaped bank 2 metres high. Within that, at the centre, seven more recumbant stones lie in what is referred to as “the cove”. The stones from a nearby quarry measure from 1.6 metres to 2.1 metres in length and, the largest of these is said to weigh 10 tons.

There are two causewayed openings in the outer bank and silted up ditch at the north-western and south-eastern sides which are probably portals (entrances), and a lower bank and ditch runs from the henge to Gib Hill farm to where there was perhaps the beginnings of a second henge? And attached to the south-eastern portal there is a round cairn of Bronze-Age date, this was excavated in 1845 when funery items were found in the cist; and at Gib Hill 320 metres to the west of the henge another Bronze-Age burial mound can be seen from which funery remains were excavated. During archaeological excavations back in 1901 a number of artefacts were excavated from the cove within the stone circle – an antler pick, oxen teeth, flints, scrapers and an arrowhead. 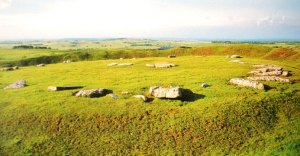 We do not know whether the blocks of stone ever stood upright or were they just propped up in  fairly shallow holes, although no trace of any holes have been found, so the mystery of Arbor Low must remain. The henge site here at Arbor Low was a place where pagan and tribalistic rituals were carried out by prehistoric settlers who lived close by. One can well imagine that. There are said to be up to 50 ley-lines intersecting or passing through the henge, something the ancient people who dwelt in the area would have been well aware of with regard to alignments and the energies of the earth.